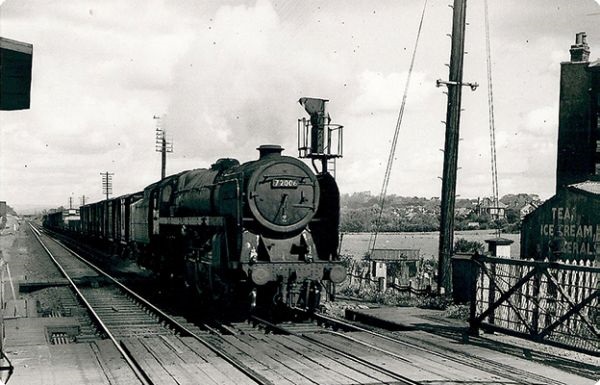 British Railways came into being in 1948 and was formed from the nationalisation of the "Big Four" British railway companies. A decision was taken at the time to construct a range of "standard" steam locomotives. Cecil Allan states "in the interests of economy standardisation of new types for the whole country obviously was desirable with dimensions and weight so planned as to give each new type the widest possible range of action". The principal progenitors of the locomotives were

The parent design office was Derby but, as in the case of other B.R. standard locomotives, all the Regional drawing offices contributed to various sections of the design.

The decision to build steam locomotives of a new design still causes controversy to this day. There are at least 3 different arguments

A series of trials was held in 1948 to ascertain the qualities of the existing locomotive stock. Unfortunately the scope and purpose of the trials were not clearly defined to the loco crews and there were widely differing results. A Southern Railways West Country Pacific "Yeovil" had demonstrated what a lightweight pacific engine could achieve on the Highland main line from Perth to Inverness when it knocked 15 minutes off the existing timings and so severely "winded" the assisting banking engine that a stop was made for it to recover.

Initial thinking was to build a class 5 Pacific as the performance of "Yeovil" had been recognised. However, it was recognised that the existing 4-6-0 Class 5 locomotive's duties were carried out with great competence and the extra expense of a Class 5 Pacific would not be worthwhile. Therefore the proposed Class 5 Pacific became a Class 6 Pacific with a target 18.5 ton axleload.

10 Class 6 "Clan" Pacific locomotives were ordered. The Clan Class 6 Pacific was to be a smaller version of the Class 7 Britannias. They were designed to have an axle load of under 19 tons to give them a wider route availability.

No. 72000 had two cylinders, 19.5in. dia., by 28in. stroke, coupled wheels 6ft. 2in. diameter and 225 lbs/sq in boiler pressure, giving a starting tractive effort of 27,520 lbs. This made the design suitable for passenger and fast freight working of the type handled by the London Midland Region Class 6 engines and the harder turns worked by the regional Class 5 locomotives.

The chassis was identical to the larger Britannia Class engine, except for minor details, but the boiler was smaller and this enabled the maximum axle load to be kept down to 19 tons, giving the engine a route availability at least as good as the various regional Class 5, 4-6-0 engines.

Ten of these engines were built as part of the 1951 Locomotive Renewal Programme, numbered 72000 - 72009, and all were allocated to the Scottish Region. They were named after Scottish Clans.

British Railways planned to build a total of 118 Class 6 Clans to work alongside 91 Class 7 Britannias. The first 5 of the next batch of 15, lot 242, were destined for the Southern Region; the remaining 10 for the Scottish Region which was scheduled to receive a total allocation of 20. The Southern Region allocation is puzzling as the region had one hundred and forty modern Bulleid Pacifics* and extensive electrification. However there is evidence that the cost of re-building the remaining West Country Class Bulleids was being weighed up against the cost of turning out new machines; also the rebuilding increased the weight which reduced the Bulleid Pacific route availability.

The Somerset and Dorset Railway route from Bath to Bournemouth (at the time under Southern Region control) was in need of about five class 6 locomotives. Borrowing engines and having to resort to a lot of double heading over this steep and twisty route were problems not dissimilar to the steep and twisty line to Stranraer over which the Clans excelled. A Crewe built loco for a line traditionally supplied by the LMS seems appropriate and such traditions are engrained in railways; this is borne out by Ivo Peters' memoirs who recalls a rumour that Bath Green Park shed was being allocated five Clans.

In 1954 there was an international steel shortage which all but halted locomotive production. During this lull the government decided to bring dieselisation forward, cancelling orders for new steam railway locomotives, starting with express passenger types, i.e. the Clans and Britannias. There is evidence that the next batch of Clans and Britannias had been started and were in fact cut up before completion.

*Bulleid's controversial Pacifics were extensively re-built by British Railways to replace the novel chain drive valve gear and oil bath with standard valve motion and remove the air smoothed casing. A running plate was added and the engines re-styled to look similar to a B.R. Standard Britannia Class. The alterations reduced maintenance costs and improved reliability but added 6 tons to the overall weight.

In August 1952 Mr K.R.M. Cameron, Running and Maintenance Officer on the Scottish Region, wrote a report on the Clans in service. The official runs were taken on all Clans in both directions between Glasgow and Carlisle, when they were first put to work in the Region. In essence the report is a glowing one, just a few minor niggles such as draughtiness, position of the chain on the firing flap and the cylinder overload valves required adjustment. The records of the runs do however draw attention to the difference between what a professional locomotive inspector considers a good run and what an enthusiastic lay train timer considers a good run - a difference in viewpoint which probably accounts for why the enthusiasts thought less of the locos than did the Regional Motive Power Department.

Mr. Cameron's assessment of the boiler and firebox;'Few repairs have been necessary where the boilers of the class 6 engines are concerned, and no real difficulties have been experienced. He confidently states that,'the firebox arrangement with its short wide firegrate is most efficient and an ample supply of steam is assured for a minimum of fuel consumed', which is just about all that could be hoped for from any boiler. He also observes that to the crews, who were so used to long narrow boxes,'the performance obtained from the new type of boiler comes as a revelation'. The only problem he noted was,'the tendency with most Fireman until they become accustomed to the excellent steam producing qualities of the boiler, is to over-fire the engine,' all these observations must have pleased E. S. Cox who lead the design team.

In conclusion Mr. Cameron the Running and Maintenance Officer for the Scottish Region rounds off his overall impression of the engines, 'it is correct to say that the British Standard Class 6, 4-6-2 locomotive is capable of producing excellent results.' He was pleased by the average coal consumption figures derived from the test runs (including one odd run which he draws attention to where the engine was obviously over fired) which returned an impressive 31.8lbs per mile*. He noted that the engines were light on water giving the crew considerable freedom between watering points, and goes on to conclude, 'The figures obtained for evaporation ratio are in consequence fairly high and there is no question that its free steaming capabilities are the outstanding feature of the new engines and over a long period, as Firemen become thoroughly accustomed to the working of the engines, considerable economics in fuel consumption will be realised.' It is difficult to see how the report could have been any more glowing.

E.S. Cox in his book (British Railways Standard Steam Locomotives pub. Ian Allen) with respect to the same report, wrote the following; 'Such runs encountered by our timing enthusiast would be rated pedestrian to a degree, and if regularly repeated would earn the class an indifferent reputation. On the other hand the same running, consistently repeated, would be the Motive Power Officers ideal of how a railway should be properly run.' He sums up by saying, 'The Clans earned full marks from their owning region; the same performances would probably contain hardly anything worth tabulating to interest the readers of the Railway Magazines.' However, Cox himself says 'The Class 6 4-6-2 locomotives turned out to be the least effective of all the standard types'. On a footplate trip from Carlisle to Shap summit where he handled the controls he says 'and have to confess to experiencing a wooliness quite absent in the other types' The Clans did not have a chance to be tested on the Rugby stationary testing plant.

*For comparison, figures all averages;

A difference of a few pounds of coal per mile hardly seems significant until you multiply it by the distances travelled. Burning 32lbs of coal a mile as opposed to 50lbs over a distance of say 150 miles is 18 x 150 = 2,700 lbs (1.2 tons), nearly a ton and a quarter difference.

Kingmoor Footplateman on the BR Class 6 by Jim McClelland

Firstly I will introduce myself, my name is Jim McClelland and I was Traction Inspector at Carlisle and I am now retired.

The reason that I am writing to you is my good friend and colleague, John Duncan who, is Chief Mechanical Engineer for The Steam Locomotive Operators Association was telling me that you are going to build a new (BR. STD Class 6) Clan Class.

I was stationed at Kingmoor Steam Shed in the 1950-60s and was involved as a fireman and driver on the original Clan Class Locomotives. One of the regular turns this loco was monitored on was the London - Stranraer Boat Train, we used to work this from Carlisle - Stranraer and lodge at Stranraer.

As a fireman I found to get best results was to keep the corners of the firebox filled and you always had plenty of steam.

As a driver I found that we were able, with the extra water capacity, to go from Dumfries - Stranraer without having to replenish the tank.

Overall I found this to be a good loco and able to run to the booked timetable.

Report on the Performance of the B.R. Standard Class 6 4-6-2 Mixed Traffic Locomotive in the Scottish Region by K.R.M. Cameron Running and Maintenance Officer, B.R. Internal Document

The Journal of the Institution of Locomotive Engineers, dissertations by R.C. Bond and E.S. Cox

A detailed history of British Railways standard steam locomotives. Volume One Background to Standardisation and the Pacific Classes published by the RCTS

The Book Of BR Standards:2 by Richard Derry published by Irwell Press